From Wikipedia, the free encyclopedia

Tancho (丹頂) is any koi with a solitary red patch on its head. The fish may be a Tanchō Shōwa, Tanchō Sanke, or even Tanchō Goshiki. It is named for the Japanese red-crowned crane (Grus japonensis), which also has a red spot on its head.

Tancho is a hugely popular variation of Kohaku, in which the only red pattern appears as a single red dot on the head. The symmetry and placement of the Tancho mark are main factors in determining the quality of any particular koi. Tancho are highly regarded in the Japanese koi industry for their resemblance to the Grus japonensis, or Red-Crowned Crane.

Although the Tancho mark can appear in many varieties of koi, the word “Tancho” by itself is almost always used to refer to Tancho Kohaku.

Variations of Tancho include Gin Rin Tancho and Doitsu Tancho. 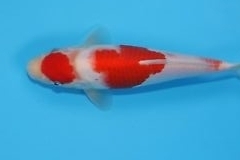 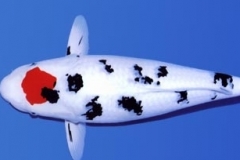 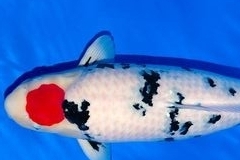 Do you have a better photo or another type of Tancho – Submit the picture to us to use, we will of course credit the photo with your name !

This website uses cookies to improve your experience while you navigate through the website. Out of these, the cookies that are categorized as necessary are stored on your browser as they are essential for the working of basic functionalities of the website. We also use third-party cookies that help us analyze and understand how you use this website. These cookies will be stored in your browser only with your consent. You also have the option to opt-out of these cookies. But opting out of some of these cookies may affect your browsing experience.
Necessary Always Enabled
Necessary cookies are absolutely essential for the website to function properly. This category only includes cookies that ensures basic functionalities and security features of the website. These cookies do not store any personal information.
Non-necessary
Any cookies that may not be particularly necessary for the website to function and is used specifically to collect user personal data via analytics, ads, other embedded contents are termed as non-necessary cookies. It is mandatory to procure user consent prior to running these cookies on your website.
SAVE & ACCEPT
Loading Comments...