From Wikipedia, the free encyclopedia
Shōwa Sanshoku (or Showa Sanke) (昭和三色) is a black koi with red (hi 緋) and white (shiroji 白地) markings. The first Showa Sanke was exhibited in 1927, during the reign of the Shōwa Emperor. In America, the name is often abbreviated to just “Showa”. The amount of shiroji on Showa Sanke has increased in modern times (Kindai Showa 近代昭和), to the point that it can be difficult to distinguish from Taisho Sanke. The kanji, 三色, may be read as either sanshoku or as sanke.

Showa Sanshoku, more commonly known as Showa, are koi that display white and red/orange patterns over top of a black base color. Showa can be easily confused with Sanke. In Showa, the black patterns will wrap all the way around the body, instead of appearing only on the top half of the body. Also, Showa will have black patterns on the head, and Sanke will not.

The red, white and black should be balanced about the body evenly, with crisp, clean edges between each color. 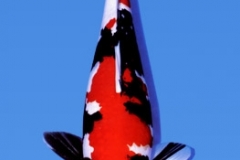 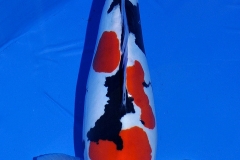 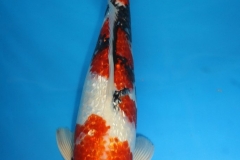 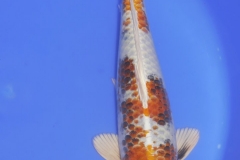 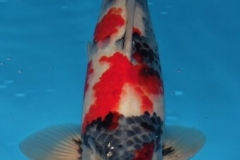 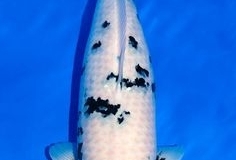 Do you have a better photo or another type of Showa – Submit the picture to us to use, we will of course credit the photo with your name !

This website uses cookies to improve your experience while you navigate through the website. Out of these, the cookies that are categorized as necessary are stored on your browser as they are essential for the working of basic functionalities of the website. We also use third-party cookies that help us analyze and understand how you use this website. These cookies will be stored in your browser only with your consent. You also have the option to opt-out of these cookies. But opting out of some of these cookies may affect your browsing experience.
Necessary Always Enabled
Necessary cookies are absolutely essential for the website to function properly. This category only includes cookies that ensures basic functionalities and security features of the website. These cookies do not store any personal information.
Non-necessary
Any cookies that may not be particularly necessary for the website to function and is used specifically to collect user personal data via analytics, ads, other embedded contents are termed as non-necessary cookies. It is mandatory to procure user consent prior to running these cookies on your website.
SAVE & ACCEPT
Loading Comments...